Home > Visitor information > How to become an owner 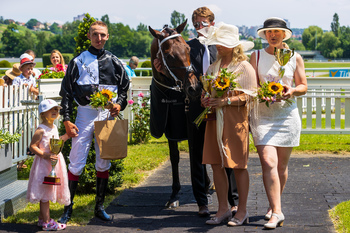 The first owners of racehorses were almost exclusively noblemen, who, after all, founded modern horse racing. Gradually, wealthier bourgeoisie, manufacturers and merchants also began to acquire their own horses, and having one's own racing stable was already a good thing in society in the first half of the last century. Owning a racehorse brings unforgettable experiences and the owner, his relatives and friends often look forward to the next start of their horse as a big family event.

The owner of a racehorse has the opportunity to name his racing stable and have his own jersey (advertising). It's not just a chance to watch the horses on the track, but actually be right there at the training center at any time of the year. Many of the training centres are also equipped for short stays of guests, for example a company party or an afternoon with a tour of the stables. It is necessary to have a clear idea from the very beginning of what I expect as a potential owner of a racing stable, what my ambitions are and of course the most important thing, how high a budget I can and want to afford.

The first form of acquiring a racehorse is buying it. Racehorses can be bought directly from breeders, existing owners or (especially abroad) at auctions. Horses of virtually any age can be bought, from foals to yearlings and two-year-olds to older horses that have already had part of their career behind them.

A less financially burdensome form is renting. The landlord pays the monthly costs and shares in the winnings, either in full or in an agreed proportion. Often the owner of the leased horse is the trainer with whom the horse is in training. Because of the possibility of naming the stable after the company and the possibility of placing the company logo on the jersey, the lease can also be claimed as a tax deductible expense.

For easier financial accessibility, recently owner associations (syndicates) have started to emerge, where several people pool the necessary amount of money and then have their stable together. Also, a syndicate can choose any of the above options for acquiring a racing stable.